General view of the ponds from near the top of the slope.

We probably all tend to undervalue the places where we live, always looking over the proverbial fence at some greener or cooler pasture. At Micromundo we try to remind ourselves as often as we can just how amazing Barcelona is, for all the city’s faults. This time we’d like to talk about Jardins Mossèn Cinto Verdaguer, on Montjuïc. Montjuïc is a large hill overlooking the commercial port and from the base of which the dense working class neighbourhoods of Poble Sec and Sants emerge. Best known for its many installations built for the 1992 Olympics, it is also home to a collage of gardens, including both the original Botanic Garden and its excellent modern counterpart, a beautiful Mediterranean climate collection built on a slope adjacent to the Olympic Stadium. Jardins Mossèn Cinto Verdaguer is our focus today, but not for the usual reasons. We’re not going to talk about its history or masterplan. No, this is about something which goes to the root of how a garden or park should work.

It’s interesting to use the word ‘garden’ to describe a public space in the first place (‘jardins’ is the plural for ‘jardí’ in Catalan, meaning ‘garden’). Aren’t gardens shut off from the world? Aren’t they small spaces? Well it’s not really an issue of semantics, but I suppose most of us imagine something more intimate when we hear the word ‘garden’. I have a theory: parks can be transitional spaces, the hosts of picnics and lunch break naps, or simply a place to escape the chaos. But gardens are spaces where visitors are unlikely to be passing through, so have time to revel in plant combinations and small features. Cinto Verdaguer has a bit of both.

By contrast to what I’m about to explain, we were struck by how unusable public spaces can be rendered by senseless policy while living in Peru in 2011, when we discovered a number of block interior parks in the new neighbourhood close to our apartment. In the dusty heat of the desert which is the entire coast of Peru, to chance upon an oasis of fresh grass with a two or three-layered flowering tree canopy was as soothing as aloe vera on a scorched sunbather’s back. We lay down to read and sketch and were promptly, though politely, informed by a private security guard that it was prohibited to walk, lie or engage in pretty much any other activity on the grass. Our bewildered question was: so what’s the space for if you can only walk through it (there were few benches by the path, to add insult to injury)? It was a space to observe, nothing more. The parks transformed from cooling pools into spatial mirages as we were moved along.

The root of the policy in the Peruvian housing scheme was likely that if you allow people free reign then they’ll take up residence in parks or gardens and clutter them up somehow. I’m a landscape architect, so my idea is that people are one of the living layers of parks – if your plan was to accommodate no human visitors you would just leave the space in a state of nature. But it’s also true that not all visitors are respectful users of space, and the costs they incur in maintenance and plant replacement are generously doled out to all of us.

So how to go about dealing with the eternal problem? Surveillance cameras? Security guards? Turnstiles? If we don’t want them privatising our public spaces we have to come up with something better. Public awareness campaigns are costly and time-consuming, and the seeds they sow may not yield much for half a generation, if ever. In Cinto Verdaguer there are a number of very smart ideas, and they are what give the space its garden quality, at least for me. On the surface it’s not actually a very interesting park, its light hidden under a bushel from the main entrance (or behind some Magnolias and a Ginkgo, to be precise). You might skip the chorus and the solo for the lacklustre intro. But if you follow the path to the ornamental lake you’ll discover a collection of square stone ponds embedded in the slope leading to the highest point in the park. They are all interconnected and planted up with a wide range of classic aquatic plants. It’s not only that they are beautiful; it’s that the way they were laid out positively encourages visitors to get involved, to walk around them and get close to the plants. While the counter argument of children interfering with developing larvae is valid, parents are usually on hand to ensure no harm comes to them. Conversely, where a flower bed can be wandered across, a pond is a natural barrier, especially because the water isn’t shallow.

Broken into many platforms with a few steps to reach the next, each wider area has benches built into the whole length of the stone walls which form the pond. Visitors pause to take photos or rest while their children (or partners) play and watch the insects and amphibians on the move in the dense pondweed. A robust stone spout in each creates a small waterfall to link the upper and lower ponds, and the pond walls are the same width all around, again encouraging careful exploration of the limits of each water body. The planting is graded from high to low, so taller Thalia dealbata or Pontederia cordata provide a dense backdrop for the floating plants. Visitors can enjoy the more subtle elegance of small yellow Brandy bottles (Nuphar lutea), the exotic pinks and yellows of Nymphaea cultivars, as well as the majestic Lotus (Nelumbo nucifera) – all within arm’s reach. To place such delicate flowers within the grasp of a visitor is a leap of faith – simply put, you tell them they are trusted. In all our many visits to the garden I never recall having seen a single plant vandalised.

There are many ways you might go about improving the park aspect of Cinto Verdaguer, but as a garden the water-lily ponds are as perfect an intervention as you can probably hope to find in public space. So the garden whispers two messages to us. First, display a measure of trust in your visitors and most people will appreciate it. Second, if the space you design is rich with life and details, make the limits clear to your curious visitors. So where the rest of Cinto Verdaguer is vulnerable to roaming dogs and children taking shortcuts across beds, the water-lily ponds are actively explored with minimal damage. At the end of the day, a garden can be a four-dimensional, living, interactive work of art which feeds all your senses, or it can be a rectangle of grass with a bench from which we spectate. 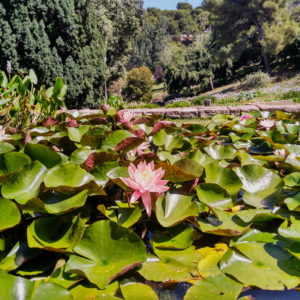 One of the Nymphaea ponds. 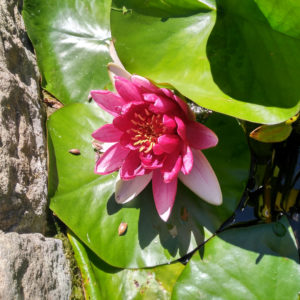 Nymphaea flowers growing by the edge of one of the ponds. 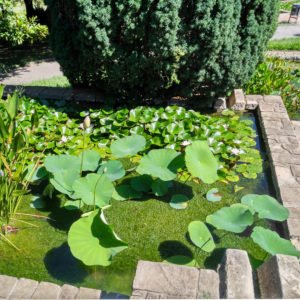 Cluster of Lotus by the pond edge. 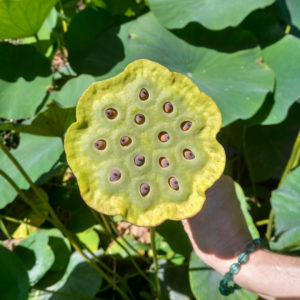 A ripening Lotus pod with seeds. 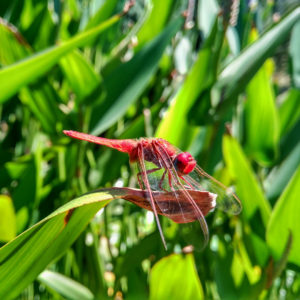 A dragonfly is in itself a sign of a well-maintained space, given that the creature’s famous winged form is only the last, short stage of a full life lived underwater as a nymph, in some cases for up to five years. 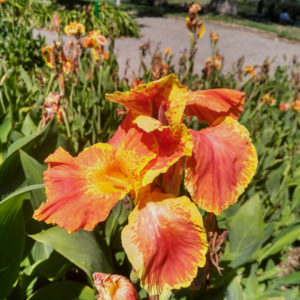 The speckled variegation of a Canna indica cultivar just below the ponds.